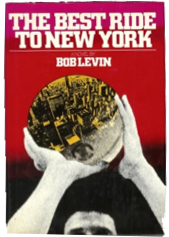 An existential sports novel in the tradition of The Hustler and Fat City about a minor league basketball player. Sex, drugs and hoops. Out of print. $10. Signed.

“sensitive, sad, and it defies classification. But it is superbly written.”

“The most striking first novel since …The Friends of Eddie Coyle.”

“admirable; it tells a small story skillfully and sensitively.”

“It has the unmistakable ring of truth, closely observed and forcefully communicated.”

“a serious novel … a considerable talent.”